Greg Olsen‘s first free agency tour will produce a deal with the Seahawks. The veteran tight end will choose Seattle over Buffalo and Washington, according to Adam Schefter of ESPN.com (on Twitter). 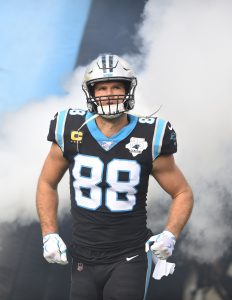 The 13-year veteran agreed to a one-year, $7MM deal with the Seahawks, per Schefter, who adds this pact comes with $5.5MM guaranteed. The chance to play with Russell Wilson helped make Seattle a more attractive destination than those with ex-Panthers staffers in place, per Schefter (on Twitter).

Wilson has gone through a few tight ends since Jimmy Graham‘s departure. Ed Dickson experienced consistent injury troubles over the past two years; so has promising youngster Will Dissly. Olsen will add a proven weapon to Seattle’s pass-catching corps, coming in for his age-35 season.

The Seahawks last season were down both Dickson and Dissly, and they traded Nick Vannett to the Steelers early in the season. Jacob Hollister started both playoff games. Barring injury, Olsen will be in line to join Tyler Lockett and D.K. Metcalf as one of Wilson’s top three targets next season. The Seahawks will be Olsen’s third team, following the Bears and Panthers.

In nine Carolina seasons, Olsen became one of the best players in franchise history. He eclipsed 1,000 yards en route to three Pro Bowls from 2014-16 and helped the Panthers to a 15-1 season that produced an NFC championship. Since coming into the league as a first-round pick out of Miami in 2007, Olsen has 8,444 receiving yards — third-most in the NFL among tight ends in that span.

Olsen, however, experienced significant foot trouble late in his Panthers tenure. Although Olsen played 14 games last season, he missed 16 games between the 2017-18 campaigns because of multiple foot maladies. This marks another injury-prone tight end on Seattle’s roster. The potentially rebuilding Panthers released Olsen, who had one more season left on his Carolina contract, earlier this month.

This will put Ron Rivera‘s Redskins in the market for another tight end and may move Sean McDermott‘s Bills to pursue one as well. FOX will need to delay plans to hire Olsen for one of its Sunday broadcast teams as well. The network has used Olsen for multiple broadcasts late in his career and made him an offer to join full-time this offseason.