Greg Robinson could be in some legal trouble as he gets set for free agency in March. The former No. 2 overall pick was arrested near the U.S.-Mexico border on Monday and police say that he was carrying a large quantity of marijuana (via TMZ). 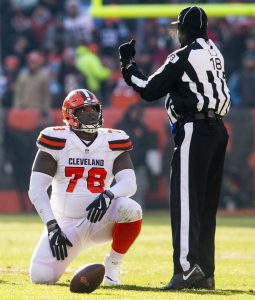 Robinson is facing a federal charge of possession with intent to distribute, according to the report. This may hamper Robinson’s market, which was already looking iffy after a down year with the Browns.

Robinson, 28 in October, was solid in his first year with Cleveland. He re-upped with the Browns on a one-year, $7MM deal before the 2019 season, but he failed to deliver an encore performance. He allowed lots of pressures against Baker Mayfield, garnered lots of flags, and temporarily lost his starting job.

Despite his natural talent and size (he stands at 6’5″ and weighs about 330 pounds), Robinson has yet to show consistency at the pro level. The dearth of tackles across the NFL probably would have allowed him to find some guaranteed money on the open market, but this latest news will hurt his chances. And the Browns, who are open to giving running back Kareem Hunt another chance after his latest slip-up, might not have the same level of patience with Robinson.