The Ravens earned a last-minute, come-from-behind victory over the Broncos Sunday afternoon, but the main talking point in the aftermath of the game is the health of their starting quarterback. Lamar Jackson exited the contest after taking a hit in the first quarter, and did not return. 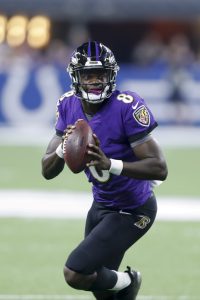 Jackson’s absence was caused by a knee injury, and it remains unclear at this point how much time he will miss as a result of it. When speaking to reporters after the game, head coach John Harbaugh said that Jackson’s recovery timeline would be a matter of “days or weeks,” meaning that it is not expected to be season-ending. Ian Rapoport of NFL Network tweets that the 25-year-old is believed to have suffered a knee sprain.

While more will be known in the coming days after further tests, an absence of any length would of course be massive for Baltimore. Jackson has remained the focal point of the Ravens’ offense in 2022, a season in which top wideout Rashod Bateman has suffered a season-ending foot injury, All-Pro left tackle Ronnie Stanley has been limited to six games with lingering ankle issues, and the team has had a resultant inability to find a rhythm in the passing game. On the ground, the two-time Pro Bowler has paced the team with 755 rushing yards entering Week 13 – 363 more than the next-leading rusher.

From a financial standpoint, this injury could loom large. Jackson is scheduled to hit free agency at the end of the year, after he and the Ravens could not reach an agreement on a long-term deal. A franchise tag is widely expected to be used if the same holds true in the coming months, but a lengthy absence – coupled with the Louisville alum’s inconsistent performances this year – could hurt Jackson’s leverage in future negotiations.

In Jackson’s absence, the Ravens turned to backup Tyler Huntley under center. The former UDFA made four starts to close out the 2021 campaign, after Jackson was sidelined by an ankle injury. He went 1-3 in that span, putting up middling passing numbers along the way. His rushing ability (6.3 yards per carry, two touchdowns), however, demonstrated his likeness to Jackson from a skillset perspective, something which could ease another transition to him as the starter if that proves necessary.

With the 10-9 win, the Ravens moved to 8-4 on the season and will retain their lead in the AFC North for at least one more week. Their prospects moving forward, however, could take a substantial hit depending on developments in the coming days.