Dolphins tight end Adam Shaheen has tested positive for COVID-19 (Twitter link via NFL.com’s Tom Pelissero). He’ll be placed on the COVID list for now, which will rule him out for Sunday’s season opener against the Patriots. 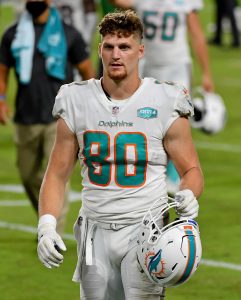 Fortunately, Shaheen is not experiencing any major symptoms. However, since he’s unvaccinated, league rules will mandate a minimum of ten days on the COVID reserve list.

The Dolphins acquired Shaheen — a former second-round pick — from the Bears in 2019 for a conditional seventh-round pick. Then, in October of 2020, they re-upped him on a two-year, $7.85MM deal with $3.2MM guaranteed.

Shaheen didn’t live up to expectations in Chicago, due in large part to injuries. All in all, he had 26 receptions for 249 yards and four touchdowns in 27 Bears games, out of a possible 48. With the Dolphins, he’s managed to stay healthy while serving as a solid blocking tight end. In a full slate last year, he went 12/150/3 on 32.8% of the team’s snaps.

The Dolphins have officially acquired tight end Adam Shaheen from the Bears, per a club announcement. In exchange, Miami will send a conditional 2021 seventh-round pick to Chicago. 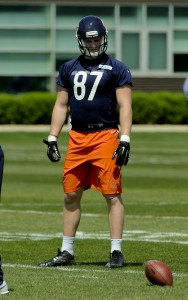 The Bears had a major logjam at tight end and they were at a breaking point with roster cuts just around the corner. Rather than releasing him outright, Chicago managed to get something in return for the former second-round pick.

Shaheen hasn’t played up to his 2017 expectations, thanks in part to injuries over the last three years. All in all, he has totaled 26 receptions for 249 yards and four touchdowns in 27 games, out of a possible 48. For the Dolphins, it’s effectively a no-risk pickup. If Shaheen doesn’t make the final cut in Miami, they won’t have to send that seventh-round choice to Chicago. Even if he does make the Week 1 roster, the trade could still wind up as a wash – often times, draft pick conditions in trades like these are tied to snap counts.

Mike Gesicki projects to serve as the Dolphins’ top TE. Beyond that, Shaheen will fight for his spot alongside Durham Smythe and Michael Roberts.

Trey Burton will have a different backup tight end Sunday. The Bears will sub out Dion Sims for Adam Shaheen on their 53-man roster, activating the second-year tight end from IR and sending the 2017 free agent signing to the injured list, Mike Garafolo of NFL.com reports (on Twitter). 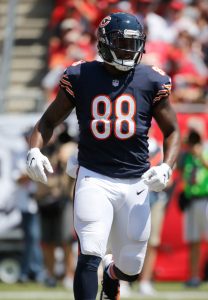 Chicago designated Shaheen for an IR return last week and had three weeks to activate him. He will likely make his season debut Sunday night against the Vikings.

A concussion will send Sims to IR. The former Dolphins tight end played in eight Bears games during his second season with the franchise but only caught two passes, with first-year Bear Burton becoming the starter this season.

Shaheen came out of Division II Ashland as an athletic marvel but has yet to contribute much as a pro. Preseason ankle and foot injuries sidetracked the 6-foot-5, 270-pound target’s development. He caught 12 passes for 127 yards and three touchdowns last season and poses as an interesting weapon for Mitch Trubisky down the stretch.

Sims did well for himself in free agency last year, signing a three-year, $18MM deal. The $6MM-AAV pact handed to the former Miami backup was more than Austin Seferian-Jenkins or Jared Cook received from their respective teams. Sims, though, has 17 receptions as a Bear in his two-year Windy City run. Considering a 2019 cut would save the Bears $6MM, and with Burton and Shaheen under contract long-term, Sims will surely be a release candidate as the next league year approaches.

With more than half of the 2018 campaign in the books, NFL clubs have started to exercise their right to return players from injured reserve. Each team is allowed to bring two players back from IR, but said players must have been retained on their respective club’s initial 53-man roster. Once an IR player returns to practice, his club will have three weeks to decide whether to activate him to their 53-man roster; if he’s not activated, the player will remain on injured reserve for the remainder of the season.