The Bears have reached a two-year deal with cornerback/special-teamer Sherrick McManis, reports Brad Biggs of the Chicago Tribune. 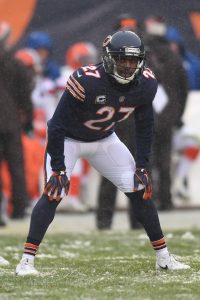 While McManis is technically listed as a defensive back, he almost never plays on the defensive side of the ball. Instead, the 30-year-old spends most of his time on special teams, an area where the Bears ranked 23rd in DVOA a season ago.

In 2017, McManis saw only 31 defensive snaps, but played on nearly 80% of Chicago’s special teams plays. In total, McManis managed only one tackle in 13 games, but Eric Eager of Pro Football Focus called him one of the league’s best special-teamers at midseason, noting his ability to play both gunner and vice.

Here are a few of the latest contract details for players who have agreed to new deals and/or signed them in recent days. All links are courtesy of Aaron Wilson of the Houston Chronicle unless otherwise indicated…

The Bears are set to re-sign special teams ace Sherrick McManis, Brad Biggs of the Chicago Tribune tweets. McManis will get a new two-year deal from Chicago. Financial terms of the deal are not yet known.

The cornerback was also picking up interest from the Patriots and Jaguars. McManis doesn’t see a ton of time on defense, but he led the Bears with 17 special teams tackles and he carries a ton of value in that facet of the game.

In other Bears news, the team agreed to sign free agent tackle Bobby Massie to a three-year, $18MM deal with $6.5MM guaranteed on Wednesday. A starter in Arizona during the 2012, 2014 and 2015 seasons, Massie started 16 total games for the Cardinals last season, including both playoff contests, at right tackle.

The Broncos offered Malik Jackson roughly $11MM per year before he signed with the Jaguars, Troy Renck of The Denver Post tweets. The Broncos also made a strong offer to Brock Osweiler before he decided to join up with the Texans. The Broncos did not want to let linebacker Brandon Marshall get away, of course, which is why they used a second round RFA tender on him. When it comes to Danny Trevathan, however, the team decided to move on, so the front office wasn’t too crushed when he signed with the Bears.

Teams around the NFL have been busy today, making minor roster additions and subtractions as they continue to survey the remaining free agent landscape and prepare for this month’s draft. Here are Wednesday’s minor transactions from across the league: