Greg Roman‘s early-season dismissal has generated consistent fallout since the Bills and their OC parted ways on Friday. The latest comes from Bills sources who are glad the firing occurred.

“I haven’t talked to anybody that isn’t excited about the move,” a Bills source told Tom Pelissero of USA Today.

According to the sources, Bills players believed their offense lacked an identity, even as the team raced to the top of the NFL in rushing in 2015. They saw an offense that would change randomly from week to week instead of building on what was working, per Pelissero, leaving the team prone to three-and-outs when big plays didn’t occur.

Here’s the latest from the AFC East.

The Patriots announced that they’ve placed guard Tre’ Jackson on the reserve/PUP list. As such, Jackson will miss the first six weeks of the regular season — New England will then have a three-week window during which it can decide to activate Jackson.

Jackson, 23, was selected by the Patriots in the second round of last year’s draft. During his rookie season, Jackson played a key role on a New England offensive line that was dealt injury blows throughout the year, and he ended up starting nine games (and appearing in 13). According to Pro Football Focus, Jackson was roughly average in 2015, grading as the NFL’s No. 47 guard.

Additionally, the Patriots announced last Tuesday defensive lineman Frank Kearse was released, but he was instead was placed on IR, according to the NFL transaction wire (via NESN’s Doug Kyed). Originally drafted by Miami in the seventh round of the 2011 draft, Kearse has also had stops with Carolina, Tennessee, Dallas, and Washington.

The Patriots have released running back Donald Brown with an injury settlement, according to a source who spoke with Jeff Howe of the Boston Herald. Brown hasn’t practiced for three weeks due to an undisclosed injury. 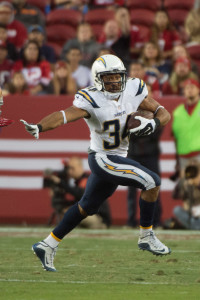 As Howe notes, Brown was working with first team earlier this summer and he figured to be a big part of the Pats’ plans. Instead, he’ll be looking for employment elsewhere once he resumes being healthy. The Pats are now left with LeGarrette Blount, James White, Brandon Bolden, Tyler Gaffney, D.J. Foster, and Joey Iosefa at running back. Blount, White, and Bolden are expected to make the roster while Gaffney is probably the frontrunner for the fourth RB spot.

Although he made a handful of starts during his two years with the Chargers, particularly when the club’s backfield was hit hard by injuries, Brown never made a significant impact. In total, he accumulated 452 rushing yards on 144 attempts (3.1 ypc), and added 299 receiving yards on 37 catches.

The Patriots added prospective defensive line depth in the form of Frank Kearse, according to the team’s website.

An unrestricted free agent, Kearse shuffled back and forth from Washington’s active roster and practice squad last season. The defensive tackle appeared in four games in 2015 after playing in 15 during the previous season for Washington.

Originally a seventh-round pick of the Dolphins’ in 2011, Kearse has 5.5 career sacks accrued with the Panthers and Washington from 2011-14.

New England could be losing Akiem Hicks, with the defender visiting the Lions and Bears, and the 27-year-old Kearse could represent some competition for a depth spot along the Patriots’ defensive front.