Jermaine Kearse is calling it a career. On Wednesday, the longtime NFL wide receiver and former Seahawks standout announced his retirement via Instagram. 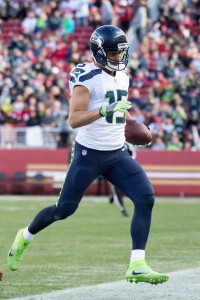 “Seattle, as a hometown kid it was a complete honor to represent you guys out there on the field,” Kearse wrote. “Thank you so much for your endless support throughout my football career. It was an honor to put on that ‘Hawks uniform and I’m so grateful I was able to help bring our first Super Bowl home!”

Kearse entered the league in 2012 as an undrafted free agent out of the University of Washington. He was used sparingly in his first Seahawks season, but he found his way into the mix by Year Two. Across five seasons, Kearse notched 2,109 receiving yards for Seattle and, most notably, a Super Bowl ring for the 2013 season. In 2017, the Seahawks sent him off to the Jets in a trade for defensive lineman Sheldon Richardson. Kearse kept up the good work with Gang Green, including his best production ever in 2017 — 65 catches, 810 yards, and five touchdowns.

In 2019, a serious leg/ankle injury wiped out his would-be season with the Lions. We haven’t heard the 30-year-old’s name mentioned lately, so his retirement doesn’t come as a huge surprise. We here at PFR wish Kearse the best in retirement.

Kearse was blocking on a run play, and a defender rolled into him. The veteran wideout signed a minimum-salary Lions pact earlier this summer. He required an air cast after the injury, per the Detroit News’ Justin Rogers (on Twitter).

This news could obviously mean Kearse’s Lions tenure will be brief. Detroit returns Marvin Jones from injury and has emerging talent Kenny Golladay. The team added Danny Amendola on a one-year deal as well this offseason. The Lions drafted Travis Fulgam in Round 6 and signed return man Tommylee Lewis this year, too.

Kearse, 29, spent the past two seasons with the Jets. After an 810-yard Gang Green debut season, the former Seahawks UDFA find posted just 371 last season. The Lions marked his only known workout. For a player to be eligible to come off IR during the season, he must be carried through to the 53-man roster. If the Lions place Kearse on IR before then, he cannot play for them this season.

The Lions have signed wide receiver Jermaine Kearse, according to a team announcement. It’s a one-year, $1.35MM deal with a max value of $2.3MM, including $350K guaranteed, according to ESPN.com’s Adam Schefter (on Twitter).

The deal reunites Kearse with offensive coordinator Darrell Bevell. Given their five years working together in Seattle, it shouldn’t take long for the 29-year-old to learn the playbook. Also, given the Lions’ lack of depth at the wide receiver position, there’s a clear opportunity for Kearse to make the cut and make an impact.

The Lions auditioned Kearse in late May and quickly made him an offer, but he walked away in hopes of finding something more substantial. It’s not clear whether the Lions upped the ante to get Kearse, but they managed to land him in June.

The Lions worked out wide receiver Jermaine Kearse, according to Adam Schefter of ESPN.com (on Twitter). However, a deal is not necessarily on the horizon. The Lions made an offer to the Jets free agent, Schefter hears, but the two sides were unable to reach an agreement.

Last year, Kearse made $5.55MM and he is probably reluctant to take a serious pay cut from that figure. Meanwhile, the Lions already boast a deep group of receivers, so they’re not exactly desperate for the veteran’s help.

The Jets fear wide receiver Jermaine Kearse may miss Week 1 after undergoing a medical procedure to treat an abdominal injury, according to Manish Mehta of the New York Daily News. 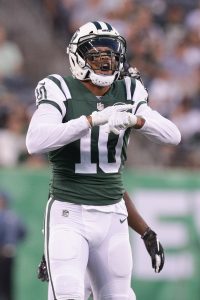 Kearse’s timetable for return isn’t exactly clear, as Brian Costello of the New York Post tweets. Kearse could conceivably recover in time for the season opener, or perhaps miss a few weeks with the injury. As Costello notes, Kearse’s ailment is “impossible to predict.”

If Kearse is sidelined, the Jets will need to turn to the other receiving options on their roster. Without Kearse in tow, New York would likely use Robby Anderson, Quincy Enunwa, and Terrelle Pryor as their starting wideouts in three-WR sets. Gang Green could also conceivably grab a pass-catcher off waivers or via trade in the coming days.

Kearse, 28, enjoyed the best statistical campaign of his career in 2017 by managing 65 receptions for 810 yards and five touchdowns. He’s entering the final season of his contract, and is scheduled to make $5.55MM during the upcoming season.

Although there’s been some speculation the Jets could release veteran wideout Jermaine Kearse in the coming months, Kearse seems likely to stick on New York’s roster, according to Brian Costello of the New York Post. Gang Green would save $5.5MM by cutting Kearse prior to the beginning of the regular season, and the club has a well-stocked depth chart at receiver that includes Terrelle Pryor, Robby Anderson, and Quincy Enunwa, among others. However, the Jets certainly don’t need any extra cap space (they’re seventh in the league with more than $20MM in reserves), and Kearse is viewed as a high-quality locker room presence. Perhaps most importantly, Kearse posted the best statistical campaign of his career in 2017 by managing 65 receptions for 810 yards and five touchdowns.