The Bears could be down their top two QBs when they take on the Packers on Sunday, so the team has added some reinforcement at the position. ESPN’s Courtney Cronin reports (via Twitter) that the Bears have signed quarterback Tim Boyle off the Lions’ practice squad. 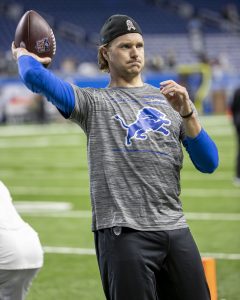 Starting quarterback Justin Fields is currently dealing with an injury to his non-throwing shoulder that forced him to miss Sunday’s game against the Jets. Trevor Siemian gutted through an oblique injury to play in that loss to New York, and it’s uncertain if he’ll be able to suit up this weekend. That would leave Nathan Peterman as the only healthy quarterback on the roster, so the team ended up snagging Boyle off Detroit’s taxi squad.

Boyle served as a backup to Aaron Rodgers to begin his career before catching on with the Lions in 2021. He ended up getting three starts for Detroit last year, completing 61 of his 94 pass attempts for 526 yards, three touchdowns, and six interceptions. The 28-year-old re-signed with the Lions this past offseason, and after getting cut at the end of the preseason, he caught on with the organization’s practice squad.

He’ll likely be a temporary piece in Chicago once the team’s QB corps is completely healthy. However, Boyle wasn’t just a random fill-in. Cronin notes that the Bears signed him because of his familiarity with offensive coordinator Luke Getsy, who was the Packers’ QBs coach when the two were in Green Bay.

The Bears made two more moves today, placing defensive back Dane Cruikshank on injured reserve and signing defensive lineman Andrew Brown off the Cardinals practice squad. Cruikshank has gotten into eight games for Chicago this season, but a hamstring injury will sideline him for at least the next four games. Brown has 23 games of NFL experience, with the former fifth-round pick having collected 18 tackles and one sack in time with the Bengals, Texans, and Chargers.