The Raiders recently replaced Karl Joseph on their active roster with D.J. Swearinger, but with Lamarcus Joyner battling an injury as well, they are searching for cornerback help. Ex-Seahawks and Lions corner DeShawn Shead is working out for the team Monday, Ian Rapoport of NFL.com tweets. 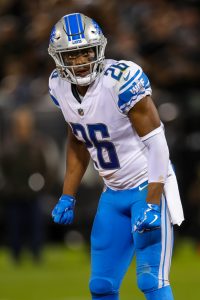 Shead has not played this season but was most recently linked to both of his former teams. He caught on with the Seahawks earlier this year and worked out for the Lions last month.

His career turning during a 2016 divisional-round game in Atlanta, Shead has not returned to the full-time starter role he occupied before suffering a broken leg that day. However, the 30-year-old defender did play in 12 games (with one start) for the Lions last season.

Oakland has lost some key secondary cogs this season, with Johnathan Abram going on IR and Gareon Conley being traded to Houston. The team has used Joyner more as a slot corner than in the pure safety role he played with the Rams the past two seasons. Jon Gruden said he was concerned about Joyner’s immediate status following his hamstring injury against the Chargers.

2 comments on “Raiders To Work Out CB DeShawn Shead”