Chuma Edoga did not clear waivers, nor did he make it too far down the priority list. The Falcons submitted a successful claim for the former third-round pick, Ian Rapoport of NFL.com tweets. 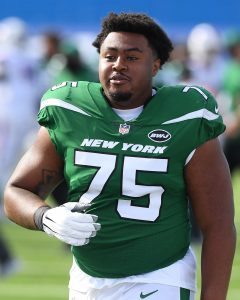 The Jets cut bait on the fourth-year tackle on Tuesday, in trimming their roster to 53. Edoga was drafted just prior to GM Joe Douglas taking over in New York and was unable to carve out a steady role there.

The Jets moved on from a plan of Edoga competing for a starting job early, signing George Fant in 2020 and then drafting Mekhi Becton in that year’s first round. Despite Becton going down with a severe injury this summer, the Jets signed Duane Brown. He and Fant are now in place as Gang Green’s tackles. Edoga, who started 12 games from 2019-20, will have a chance to vie for a steady Falcons gig.

This news also comes after a report indicated the Cowboys were interested in trading for Edoga. While the East-division teams were unable to work out a deal, the Falcons’ claim prevents the Cowboys from bringing in the USC alum. Atlanta resides ahead of Dallas on this year’s priority list. The Cowboys are facing the prospect of Tyron Smith missing a few months due to suffering the same injury Becton did — an avulsion fracture — late during training camp.

Jake Matthews and Kaleb McGary remain the Falcons’ starting tackles, and the team brought in former Seahawks first-round pick Germain Ifedi this offseason. He sits as a backup. Atlanta also added Elijah Wilkinson, who started in place of Ja’Wuan James on many occasions for the Broncos from 2019-20 at right tackle, but are preparing to use him as their right guard starter.