Having seen time at left tackle and right tackle since being drafted in the 2021 second round, Teven Jenkins saw injuries interrupt his rise to the Bears’ starting lineup last year. And he has failed to impress the new Chicago regime this offseason. 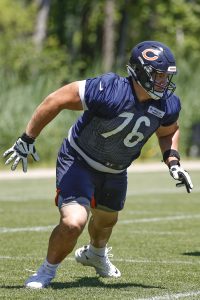 With a path to a first-string tackle gig not opening, Jenkins is now working as a guard. The Bears have shifted the Oklahoma State product inside, Matt Eberflus said (via The Athletic’s Adam Jahns, on Twitter). This comes after the team used Jenkins exclusively at right tackle in their preseason opener Saturday, Courtney Cronin of ESPN.com adds.

Since his 36-snap right tackle outing against the Chiefs, Jenkins has been at guard. After working as a backup right guard Monday, Jenkins repped with the Bears’ first-stringers at the position Tuesday, per the Chicago Tribune’s Brad Biggs, who views that usage as an open door to Jenkins being the team’s right guard starter in their second preseason game. The Bears had been using Michael Schofield as their starting right guard. Despite Schofield’s status as an 81-game starter over the past seven seasons, his veteran-minimum salary — agreed to at the start of training camp — with no guaranteed money does not point to entrenched starter status.

This has marked an eventful odyssey for Jenkins since he was drafted. After trading third- and sixth-round picks to move up for him — in a draft that had already included a trade-up for Justin Fields that cost a future first — the Bears released longtime left tackle Charles Leno. Jenkins’ back injury, which required surgery, changed the team’s 2021 plans. Jason Peters entered the equation. While Jenkins did return late in the season, he did not establish momentum this offseason.

The Bears are using fifth-round rookie Braxton Jones and 12th-year veteran Riley Reiff at tackle. The team also has 2021 rookie-year starter Larry Borom as an option behind the first-string duo. Jenkins was mentioned in trade rumors earlier during camp. For now, however, he will be tried as an inside option on a remade offensive line. This marks a rather late transition for Jenkins, who played exclusively at tackle at Oklahoma State. Schofield, 31, would seem to represent insurance in case the younger blocker is not ready for such a transition.