Previously a possibility at left tackle, Riley Reiff now looks to be settling in on the right side. The Bears moved the longtime NFC North left tackle-turned-Bengals RT off the blind side recently, with Courtney Cronin of ESPN.com noting rookie Braxton Jones has taken most of the left-side reps over the past several days. 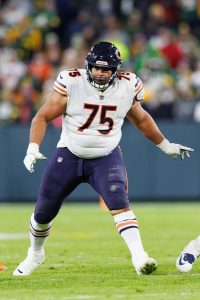 Reiff, 33, played right tackle with the Bengals last season, prior to going down with a mid-December ankle injury that shelved him for the team’s unlikely Super Bowl run, and moved to the right side in 2016 to accommodate Lions first-round pick Taylor Decker. In every other season, Reiff has primarily been a left tackle.

Jones and Reiff starting would leave Chicago with two new tackle starters. The team’s top 2021 left tackle, Jason Peters, remains a free agent. The player the previous regime hoped would commandeer that post, Teven Jenkins, has not done so. The 2021 second-round pick has battled injuries throughout his career. While Jenkins has returned to practice, he has lined up with the Bears’ second- and third-string lines since doing so, Kevin Fishbain of The Athletic tweets.

As Jones began to show starter readiness during the Bears’ offseason program, Jenkins has already popped up in trade rumors. The Bears chose Jones 168th overall out of Division I-FCS Southern Utah. This would obviously be a big jump from his 2021 gig.

Larry Borom worked as Chicago’s primary right tackle last year, but the 2021 fifth-round pick is playing behind Reiff presently. Pro Football Focus graded Borom outside its top 60 tackles last season. Although O-line development usually takes some time, the Bears’ new coaching staff may be prepared to let the Mizzou product learn from the bench behind Reiff (139 career starts). Borom has been working at both tackle spots, suggesting a potential path as the team’s swing backup.

The team exited the 2020 season with one of the league’s most stable tackle tandems, with Charles Leno and Bobby Massie having started together for five years. The Bears, however, released Leno and did not re-sign Massie during the 2021 offseason. Leno is now with Washington, tied to an extension signed earlier this year, while Chicago searches for long-term replacements. The Bears are not expected to contend this season, but Justin Fields preparing for his first full campaign as the team’s starting quarterback certainly makes tackle performance important through a longer-term lens.

Additionally, late-July pickup Michael Schofield is ticketed to be the team’s top right guard, Cronin adds. Mainstay Cody Whitehair remains the Bears’ other guard starter, while ex-Packer Lucas Patrick is poised to be the Bears’ new center. A former Super Bowl starter at right tackle with the Broncos, Schofield has been a serviceable guard in the years since. The Chargers used him as a guard starter in 49 games over the past five years.