The Rams have made their decision at the eleventh hour, using their non-exclusive franchise tag on cornerback Trumaine Johnson, reports Jason La Canfora of CBSSports.com (Twitter links). The team had been mulling whether to tag Johnson or fellow free agent cornerback Janoris Jenkins. 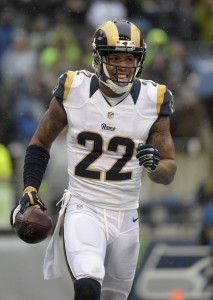 Coming into the 2015 season, Johnson had started just 20 career games, compared to Jenkins’ 43 total starts. Although conventional thinking suggested that Jenkins was the more valuable defensive back, Johnson arguably looked like the better player in 2015, as PFR’s Zach Links wrote in his preview of the Rams’ offseason. Johnson racked up seven interceptions and 17 passes defended, earning a higher Pro Football Focus grade than his teammate.

As the Rams debated which cornerback to tag, Jenkins fired his representation, putting negotiations with him on hold for the time being. Although Jenkins looks set to hire Neil Schwartz as his new agent on March 3rd, it would be a surprise if he re-signed with the Rams before reaching the open market next week.

Earlier this week, Jenkins tweeted, “Total disrespect when u held down one side all 4 years and force the ball the other way.. #ThanksButNoThanks,” suggesting that negotiations with the Rams weren’t progressing well before he changed agents. Jason Cole of Bleacher Report suggested that Jenkins had turned down an offer in the range of five years and $45MM, and considering what Byron Maxwell got on the open market last year (six years, $63MM), it’s fair to believe Jenkins could exceed $9MM annually.

Given the problems the Rams appeared to be having getting an extension done with Jenkins, I wondered on Monday if the team might use its franchise tag on him, with the aim of locking up Johnson to a multiyear deal. Johnson could still sign a long-term contract anytime before July 15th, but it’s increasingly starting to look like Jenkins won’t be back with the franchise as it prepares for its move to Los Angeles.

As for Johnson, his franchise tender, which he can sign at any time, will be worth $13.952MM. Only three cornerbacks in the NFL – Darrelle Revis, Patrick Peterson, and Richard Sherman – are on contracts with higher per-year salaries than that, but the Rams can afford the cap hit — the team entered this week with nearly $60MM in projected cap room.

One comment on “Rams Place Franchise Tag On Trumaine Johnson”