The Rams have placed a non-exclusive franchise tag on safety Lamarcus Joyner. Because each team is only allowed to tag one player per offseason, this means that Sammy Watkins will be ticketed for free agency unless the two sides come to an agreement between now and March 14. 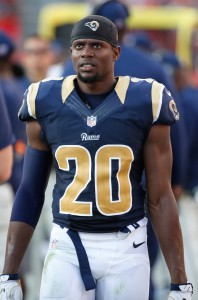 The Rams are still intent on keeping Watkins, according to Ian Rapoport of NFL.com (Twitter link). Although the Rams value both players, tagging Joyner was the less costly option. The franchise tag for safeties this year is $11.287MM. Conversely, the tag for wide receivers is $15.982MM.

The Rams have a fair amount of flexibility this offseason, so an extension for Watkins could still be in the cards. At the same time, they’ll have to factor for future deals with running back Todd Gurley and defensive tackle Aaron Donald. On the plus side, their recent trade of Robert Quinn to the Dolphins has opened up additional room.

Joyner, a 2014 second-rounder, never started more than eight games in a season until 2017. He shifted from cornerback to free safety in his contract year and broke out in a big way. Last season, Joyner started 12 contests and graded out as the third-best safety in the NFL, per Pro Football Focus.

The Rams have until July 16 to hammer out a long-term deal with Joyner. If the two sides are unable to reach a multi-year accord, Joyner will play out the 2018 season under the terms of his one-year tender.

Before the tag, Joyner profiled as the top available safety in free agency. Now, the best safeties available include the likes of Eric Reid, Morgan Burnett, Tre Boston, Kenny Vaccaro, Bradley McDougald, Tyvon Branch, and Marcus Gilchrist. It remains a deep class at safety, but none of those players offer the same kind of upside as Joyner. There will be some notables on the trade market as well, but as of this writing, the Seahawks seem intent on keeping Earl Thomas.