The Chargers may not have made an official decision on the fate of head coach Mike McCoy, but it would be an “upset” if McCoy is retained for 2017, tweets Tom Pelissero of USA Today. Ian Rapoport of NFL.com adds that general manager Tom Telesco will keep his job, but team ownership will meet Monday to determine if McCoy will stick around. Meanwhile, Adam Schefter of ESPN.com reports (Twitter link) that while Telesco has recommended that McCoy be retained, San Diego is prepared to make a change. 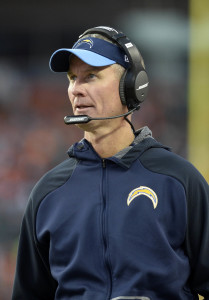 This isn’t the first time that disparate reports have surfaced regarding McCoy’s status, which could indicate that the Chargers are truly wrestling with a decision on their head coach. Just last week, Jason La Canfora of CBSSports.com indicated that because the Chargers are likely to relocate to Los Angeles — and thus, compete with the Rams in a major media market — the club would like to begin its head coaching search as soon as possible.

McCoy has led the Chargers to a 5-10 record this season, and last week lost to the previously winless Browns. During his San Diego run, McCoy has posted a career mark of 27-36, and recently confirmed that the club has not offered him an extension (he’s currently signed only through 2016).