Cardinals linebacker Kevin Minter is scheduled to become a free agent on March 9, and while he’s interested in returning to the desert, he’s “curious to see what’s out there,” Minter told SiriusXM NFL Radio today (Twitter link). Minter added he “wouldn’t mind” joining the Jets this offseason, especially given that they employ his former defensive coordinator, Todd Bowles, as head coach. 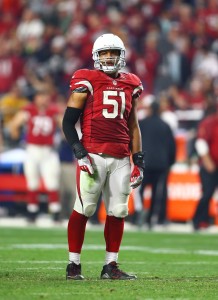 New York currently projects to have the second-least amount of cap space in the NFL, and while the club can release players and restructure contracts in order to create more room, it may have to find bargains on the free agent market. Minter could be one such cost-effective solution, as the 26-year-old graded as the league’s No. 25 linebacker among 87 qualifiers last season, according to Pro Football Focus. In New York, Minter would join David Harris and Darron Lee as linebacker options in Gang Green’s 3-4 scheme.

Minter, a 2013 second-round pick, didn’t become a full-time starter until his third season with the Cardinals, but he’s since started every contest for Arizona over the past two years. He’s a key part of the Cards’ defense, but general manager Steve Keim & Co. have other critical free agent defenders, including Calais Campbell and Chandler Jones, to worry about, meaning Minter could be the one that gets away.