Back in January, Trent Cole hinted on Instagram that he would continue playing in 2017. Roughly six weeks later, we’re getting some mixed messages. Cole told SiriusXM (Twitter link) that he will retire if he is not offered enough money on his next deal. However, he took to Twitter minutes later to say “no retirement happening here.” 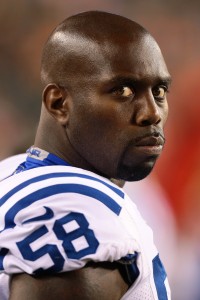 The Colts linebacker is scheduled to hit free agency this March. For many years, Cole was a starter for the Eagles, but he has been slowed somewhat by injuries and age since joining Indianapolis. In seven games last year, Cole amassed 17 tackles and two sacks. In the year prior, he totaled 32 tackles and three sacks. His Pro Football Focus scores have been in the 70s over the last two years, framing him as a slightly above-average linebacker rather than the force that he was in his Philly prime.

Cole, 35 in October, has two Pro Bowl nods and eight playoff appearances on his resume.

One comment on “Colts’ Trent Cole Plans To Continue Playing”