As part of the unique contract left tackle Kelvin Beachum signed with the Jaguars last offseason, Jacksonville holds a $5MM option bonus for 2017-2020. The option, which would fully guarantee Beachum an additional $13MM in base salary, must be exercised or declined 22 days prior to the start of the new league year, which, as Michael DiRocco of ESPN.com points out, means the Jaguars need to make a decision on Beachum by February 15, two weeks from today. 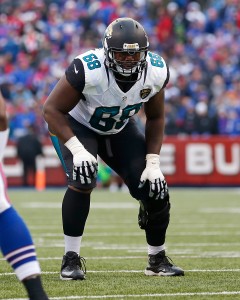 “There’s still something internally they have to continue to handle before they get to taking care of the roster,” Beachum said, adding that he’s been offered no hints about his status. “I’ve been in this position before. I was in this position in Pittsburgh last year. I don’t take anything for granted. There are no guarantees. I’m going to do what I do, which is train and take care of my body, and make sure I can do everything I can do to put my best foot forward wherever I am next year.”

Beachum, 27, was an elite left tackle during the 2014 with the Steelers, but an ACL injury during the 2015 campaign ended his season and torpedoed his free agent value. Like fellow injury-affected left tackle Russell Okung, Beachum agreed to an oddly-structured contract that fully guaranteed him only $1.5MM, but contains the aforementioned option bonus, option years, and $11MM in incentives and escalators.

Perhaps still recovering from his knee injury, Beachum struggled in 2016, grading as the league’s No. 63 tackle among 78 qualifiers, per Pro Football Focus, the same organization that rated him as the NFL’s fifth-best OT in 2014. As such, it’s fair to wonder how much the ACL is/was still bothering Beachum, even though he was able to remain on the field for 15 games.

If Beachum isn’t retained, the Jaguars will essentially have to start over at left tackle, as former No. 2 overall pick Luke Joeckel has since been moved to guard and is now headed for free agency after his own injury-marred season. With few options available on the open market, Jacksonville would likely need to invest a draft pick on the tackle position in order to stabilize a front five that ranked just 27th in adjusted line yards last year.

One comment on “Jags Approaching Decision On Kelvin Beachum”