Free agent defensive end Jared Odrick visited Monday with the Patriots, with whom he passed a physical, reports Mike Kaye of WLTV. The Patriots now have “real” interest in signing the 29-year-old, tweets Ben Volin of the Boston Globe. 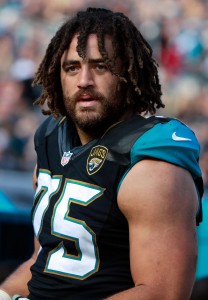 New England is the first team to publicly court Odrick since the Jaguars released him last week. In doing so, the Jaguars saved $8.5MM against the cap in 2017 and brought an end to a disappointing tenure in Jacksonville for Odrick. After signing a five-year, $42.5MM contract with the Jags in 2015, the ex-Dolphin totaled 32 tackles and 6.5 sacks in 22 games (all starts). He missed 10 contests last year with injuries, which ended a streak of five straight 16-game seasons.

The Patriots could lose a pair of established defensive ends, Jabaal Sheard and Chris Long, when free agency opens March 9. In that event, adding Odrick would give the Pats a fallback option at the position. Odrick has amassed 63 starts, 23 sacks and five forced fumbles since entering the NFL in 2010.