Redskins Could Consider Williams For GM

As they search for their next general manager in the wake of Scot McCloughan‘s firing on Thursday, the Redskins could consider one of their former quarterbacks, Doug Williams, for the role, tweets Ian Rapoport of NFL.com. Mike Jones of the Washington Post first mentioned Williams as a potential candidate Wednesday. 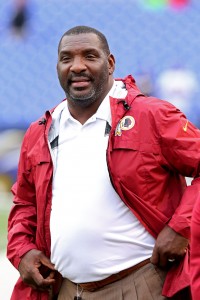 The 61-year-old Williams’ only work as a GM came back in 2011 with the Virginia Destroyers of the now-defunct United Football League, but he has garnered front office experience at the highest level with the Buccaneers (with whom he played from 1978-82) and Redskins.

Williams has been a personnel executive with Washington since 2014, but he’s best known for his tenure as the franchise’s signal-caller from 1986-89. Even though Williams only started 14 games during that four-year span, he was at the helm for the Redskins’ 42-10 rout of the Broncos in Super Bowl XXII, which capped off the 1987 season. Williams tossed four touchdowns in that game and completed 18 of 29 passes for 340 yards.

If Williams ends up as the Redskins’ GM, his most important decision in the early going will likely center on their current starting quarterback, the franchise-tagged Kirk Cousins, who could be entering his last season with the franchise. Before he helps map out Cousins’ future, though, Williams will have to beat out other general manager candidates like NFL Network draft analyst Mike Mayock and ex-Buccaneers GM Mark Dominik, among other possibilities.

4 comments on “Redskins Could Consider Williams For GM”