The jump from basketball to football may not be easy, but Mo Alie-Cox has plenty of believers in the NFL. The former Virginia Commonwealth University forward is already slated to visit the Chiefs, Buccaneers, Jets, Colts, Seahawks, and Chargers, Ian Rapoport of NFL.com tweets. More teams could request to meet with the 6’7″ athlete, Rapoport adds. 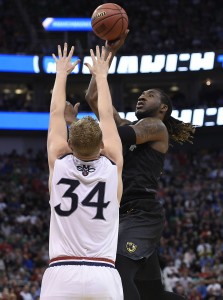 Alie-Cox held an open audition for NFL teams recently and it seems like more than half the league had scouts in attendance. In addition to the aforementioned clubs, reps from the Bears, Lions, Dolphins, Vikings, 49ers, Browns, Patriots, Redskins, and Steelers were in the house (via Lane Casadonte of WTVR on Twitter).

Despite his lack of gridiron experience, teams are intrigued by Alie-Cox’s combination of size and athleticism. He is looking to play tight end and follow in the footsteps of Tony Gonzalez, Julius Thomas, Jimmy Graham, Antonio Gates, and other TE standouts with basketball backgrounds. At the same time, he is open to playing other positions and he took requests from scouts to perform drills that were suited for different roles.

What really sets Alie-Cox apart from other young NFL hopefuls is that he is not draft eligible and, therefore, can be signed as a free agent. A team that is really high on the hoopster could see this as an opportunity to effectively acquire a late-round draft pick for nothing.

6 comments on “Six Teams To Meet With Mo Alie-Cox”