The Bills are hosting tight end Gary Barnidge on a visit today, Mike Garafolo of NFL.com tweets. Barnidge was cut by the Browns this week following the selection of Miami tight end David Njoku. 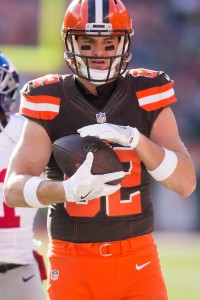 Barnidge broke out with the Browns in 2015 when he recorded 79 receptions and 1,043 yards and nine touchdowns on his way to a Pro Bowl selection. Before fantasy football fanatics learned his name, however, he spent several seasons with the Panthers. His final two years in Carolina overlapped with Sean McDermott‘s first two years as their defensive coordinator, so his shared history with the Bills head coach could lead to a deal.