The Browns have announced the hiring of former Colts general manager Ryan Grigson as a senior personnel executive. Grigson will report to vice president of player personnel Andrew Berry, who worked under Grigson in Indianapolis from 2012-15. 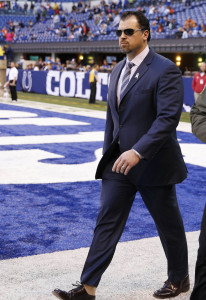 “Ryan brings valuable experience to our personnel group,” said Browns GM Sashi Brown. “He was raised as a road-scout and has been evaluating talent in this league for almost 20 years. We place a premium on that experience and on his passion for football. Ryan has much to offer to any personnel department and we are pleased that he chose to join our staff.”

Grigson had been out of work since the Colts fired him in January, which ended a five-year run atop their football department. Grigson’s tenure in Indianapolis began with a flourish, as his first draft included the likes of Andrew Luck, T.Y. Hilton, Coby Fleener and Dwayne Allen – all of whom helped the Colts win 11 games each year from 2012-14 and earn playoff berths. However, Grigson ultimately struggled to put enough talent around Luck, the crown jewel of the franchise, and had difficulty coexisting with head coach Chuck Pagano. Thanks in part to those factors, particularly the inability to support Luck, the Colts went .500 in each of the previous two seasons and owner Jim Irsay elected to part with Grigson.

Prior to his hiring in Indy, Grigson worked in scouting capacities with the Rams and Eagles from 1999-2011. He’ll return to that type of role with the Browns.