There was upheaval at tight end last month in Baltimore, which released Dennis Pitta after he suffered yet another hip injury and saw the NFL hand a one-year suspension to Darren Waller. Consequently, the Ravens could stand to acquire help at the position, but it doesn’t look as though that aid will come in the form of free agent Gary Barnidge, the top tight end on the market. 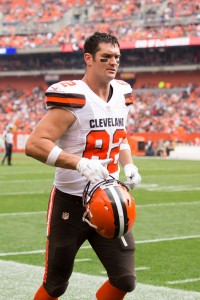 Barnidge told Glenn Clark Radio on Thursday that the Ravens haven’t reached out to him, saying (via Callie Caplan of the Baltimore Sun): “They know who to contact, who to call. I just know we haven’t heard anything yet, which is fine.”

PFR’s Dallas Robinson made a compelling case earlier this week for the Ravens to sign Barnidge, noting that their current tight ends carry significant risk.

Ben Watson, whom the Ravens signed as a free agent last offseason, missed all of 2016 after suffering a torn Achilles. That’s a difficult injury to come back from for anyone, let alone a 36-year-old. Injuries have also troubled Crockett Gillmore, who sat out 15 of the Ravens’ 32 games from 2015-16 and then missed minicamp last month on account of a hamstring issue. Maxx Williams isn’t the picture of health, either, as Jeff Zrebiec of the Baltimore Sun reported last week that knee trouble could force him to begin training camp on the physically unable to perform list. And then there’s a pair of unproven options in Nick Boyle, who has already racked up a couple PED suspensions during his two-year career, and undrafted rookie Ryan Malleck.

Considering both the lack of certainty among the Ravens’ tight ends and Barnidge’s quality production in recent years, it’s fair to suggest he’d be an upgrade for the club. Barnidge made light of his solid output Thursday.

“In the last two years with eight different quarterbacks, I was able to still put up really good numbers,” Barnidge said. “I was still one of the top tight ends in the NFL over a two-year period … I don’t think there’s any other guy that can say they’ve done that.”

While it’s concerning that the 31-year-old Barnidge has been on the open market since April – when one of the Ravens’ AFC North rivals, the youth-oriented Browns, released him – his numbers were indeed impressive over the previous two seasons. Barnidge broke out in 2015 with 79 receptions, 1,043 yards and nine touchdowns, and though he didn’t come close to replicating those stats last year, he still posted respectable totals (55 grabs, 612 yards and two scores). Additionally, the 6-foot-5, 240-pound Barnidge graded as Pro Football Focus’ best pass-blocking tight end in 2016. As Robinson pointed out, that aspect of his game could be especially useful to a Baltimore team that lost standout right tackle Ricky Wagner to the Lions in free agency.

Although the Ravens and Barnidge look like a logical match, it doesn’t appear there will be a union between the two. The Ravens could still use some of their nearly $6MM in cap space on another free agent tight end, though, with Ladarius Green, Jacob Tamme and Larry Donnell representing other notable unsigned options.