Although he went down on Thursday night, Packers running back Jamaal Williams did not suffer any ligament damage in his knee, according to Adam Schefter of ESPN.com (Twitter link). Williams “could” miss Green Bay’s next game — which doesn’t occur until October 8 — but is unlikely to be sidelined for any additional action. 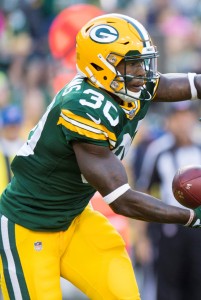 Williams, a fourth-round rookie out of BYU, took over the Packers’ starting running back job last night after Ty Montgomery suffered broken ribs. However, Williams was dealt his own injury blow after playing only 12 offensive snaps. In that time, the 22-year-old rushed four times for 11 yards and caught his only target for two yards. On the season, Williams has posted nine carries for 32 yards.

While there hasn’t been a medical update on Montgomery, he seems likely to miss time, so rookie Aaron Jones could handle the lion’s share of carries in Green Bay’s next contest. Devante Mays — the third running back drafted by the Packers in 2017 — will likely be active when the Packers face the Cowboys in Week 5, while fullback Aaron Ripkowski will also ply a large role. A free agent addition can’t be ruled out, although the need for an external option may be reduced given William’s optimistic timeline.

One comment on “Latest On Packers RB Jamaal Williams”