No Timetable For Jason Verrett Return

The Chargers don’t have a return date for cornerback Jason Verrett, who is dealing with soreness in his knee as he continues to recover from a torn ACL that ended his 2016 campaign, according to Eric D. Williams of ESPN.com. 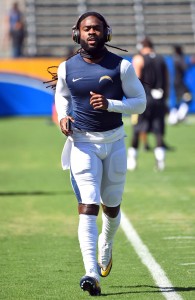 “There’s really not a timetable on Jason right now,” head coach Anthony Lynn said. “We’re still evaluating him and we just want him to get right before he’s back on the football field.

“It was never right in my opinion, just watching him in practice,” Lynn said of Verrett’s knee. “He’s such a competitor. … But he wasn’t able to play to his standard. So we just want him to get healthy.”

Verrett, 26, played nearly every snap for Los Angeles in the club’s Week 1 loss to the Broncos, but sat out for the Chargers’ game against the Dolphins on Sunday. The fourth-year defensive back was placed on injured reserve last October after playing with a torn ligament for at least two weeks. A former first-round pick, Verrett is signed through the 2018 season thanks to his fifth-year option.

One comment on “No Timetable For Jason Verrett Return”