The Seahawks tried to sign Branden Albert, but they apparently did not put enough money on the table. Despite receiving an offer, the tackle has left the Seattle area without a deal, Ian Rapoport of NFL.com tweets. 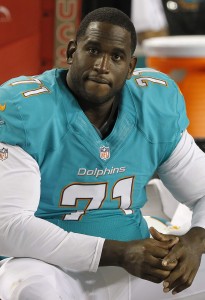 Over the weekend, Albert postponed a scheduled meeting with the Giants since he was close to signing with Seattle. Now that he’s not joining up with the Seahawks, it’s possible that he will circle back to the G-Men.

Albert’s asking price may have been to high, but the Seahawks’ best and only alternative right now is to move forward with Rees Odhiambo, who ranks as the worst tackle in the league, according to Pro Football Focus. Despite the shaky offensive line, the Seahawks are 3-2 as they come off of their bye week. Strangely enough, the Giants are next up on the schedule.