Cowboys Looking To Trade For RB?

Ezekiel Elliott‘s latest court date did not go the way the Cowboys wanted, and as of now, the standout running back is suspended for Week 9. The Cowboys have two of the most experienced backups in the game in Alfred Morris and Darren McFadden, but they appear to be interested in augmenting their situation further. 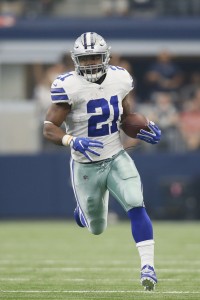 Dallas is talking about trades for a running back, Ian Rapoport of NFL.com reports (on Twitter). While Rapoport doesn’t envision the Cowboys going through with a deal, he wonders aloud if the team would be interested in making a trade to bring DeMarco Murray back.

The Cowboys are obviously not averse to splashy transactions, and Murray’s proven he can thrive in Texas, but this would cost the team additional capital to add to a position that already has two seasoned backs in the waiting in case Elliott is suspended through Week 14. Murray, however, has proven to be an upgrade on Morris or McFadden.

McFadden, though, hasn’t been active all season despite re-signing with the Cowboys in March. Elliott’s dominance the past two weeks has helped key a turnaround for the Cowboys, who are now 4-3 and in the thick of the NFC playoff race.

5 comments on “Cowboys Looking To Trade For RB?”