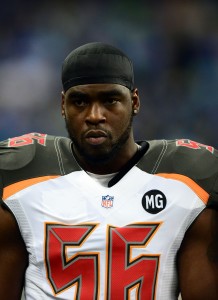 Smith, 27, had established himself as a serviceable edge rusher for the Buccaneers (13.5 sacks from 2014-15) before a torn ACL ended his 2016 campaign after only one game. After working his way back to full health, Smith had played in his first contest of the year during Week 4, but saw action on only seven snaps. Tampa Bay apparently didn’t like what it saw in that game, as it released Smith prior to its Thursday night contest against the Patriots.

Given that New York plays a 3-4 front under head coach Todd Bowles, Smith — who stands 6’2″, 250 pounds — would presumably play stand-up linebacker in the club’s base package. Smith could move to a two-point stance as a situational edge rusher, however, and that’s likely the role he’d play if signed. Kony Ealy, acquired off waivers from the Patriots earlier this year, has been used in that capacity for the Jets this season.