Josh Gordon is back with the Browns, but some have wondered if he’s there to stay. On Thursday, Gordon said that he does not plan to ask for a trade this offseason, an indicator that he may remain in Cleveland if new GM John Dorsey wants to keep him. 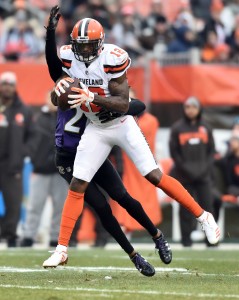 “You can ask for a trade whenever you want to really, but that’s not really on my mind, man,” he said (via Mary Kay Cabot of Cleveland.com). “I’m just glad to be back.”

Gordon has spent much of his Browns tenure off of the field. When on the field, he hasn’t been on the winning side of too many games. He’s watched former teammates Joe Haden and Kenny Britt wind up with Super Bowl contenders, but he says he wants to help Cleveland turn things around.

Dorsey, for his part, has indicated that he sees Gordon as a part of the team’s future.

“Josh is a very, very, very talented football player,” Dorsey said in a recent radio interview. “And it always helps to have talented guys on there. The one thing about Josh, what I’ve seen is and I’ve heard, he’s worked very hard to turn his personal life around. My Catholicism has taught me that, you know what, give every man a second chance in life. And as long as he’s committed to the Cleveland Browns, I’ll tell you that the Cleveland Browns are committed to him, to help him not only be a good football player but a good man off the field.”