The Cowboys plan on speaking with wide receiver Dez Bryant regarding a restructuring of his deal. On Wednesday, it was reported that the Cowboys hoped to resolve the issue at some point over the next two weeks. 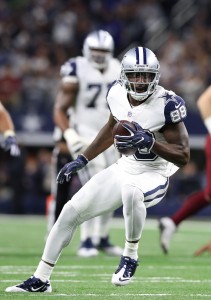 The team seemed to step back from that notion Thursday.

“We haven’t put that timeline on it,” said Cowboys executive vice president Stephen Jones during a press conference at the team’s facility, per Nick Eatman of DallasCowboys.com. “When we get ready on a decision with Dez, we’ll make it.”

Bryant, 29, signed a five-year, $70MM extension with the Cowboys prior to the 2016 season. He’s due to have a cap hit of $16.5MM in 2018. Veteran tight end Jason Witten and center Travis Frederick have already restructured their deals this offseason to create cap space. The team added a pair of wide receivers in free agency as well in Allen Hurns and Deonte Thompson.

“We’re going to sit down and we have a lot to talk about,” Jerry Jones said at the press conference. “I don’t want to say or not say anything to imply that Dez won’t be a Dallas Cowboy.”

In related news, the Cowboys have attended the pro days for wide receivers Christian Kirk (Texas A&M), Courtland Sutton (SMU) and Calvin Ridley (Alabama), who are all projected to go in the first two rounds of the upcoming draft. The Cowboys hold the No. 19 overall pick in the upcoming draft.