The Eagles are negotiating an extension with cornerback Patrick Robinson, a source tells NJ.com’s Matt Lombardo. Robinson is scheduled to reach free agency on March 14. 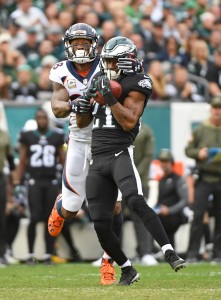 The cash-strapped defending champs will do their best to keep the band together, but they are limited in what they can offer. The Eagles are already likely to lose tight end Trey Burton, who figures to garner the most lucrative contract of any free agent tight end this offseason.

Robinson, 31 in September, emerged as a locker room leader in 2017 and gave the team quality play at slot cornerback. Last year, Pro Football Focus ranked Robinson as the sixth-best cornerback in the NFL, putting him ahead of notables such as Stephon Gilmore, Darius Slay, A.J. Bouye, and Aqib Talib. Robinson also had four interceptions, matching a career-high.

While the Eagles’ signing of Alshon Jeffery drew headlines, Robinson proved to be an excellent one-year pickup in his own right. He earned just $1MM in 2017 but he should be poised for a significant pay bump in 2018, whether it comes from Philadelphia or another team.

One comment on “Eagles Want To Extend CB Patrick Robinson”