The Jets recently hosted defensive lineman Frostee Rucker on a free agent visit, Field Yates of ESPN.com tweets. Rucker would be a logical fit for the Jets since he played under Todd Bowles in Arizona. 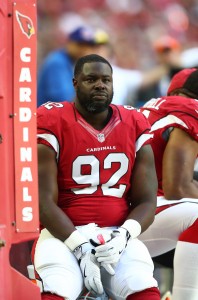 Rucker, 35 in September, profiles as a potential low-cost addition for Gang Green. Last year, he re-upped with the Cardinals on a one-year deal worth less than $1.1MM.

Earlier this month, Bowles signed another former Cardinals pupil in linebacker Kevin Minter. Minter is one of several new linebackers in New York – along with Avery Williamson, Kevin Pierre-Louis, Brandon Copeland, Neville Hewitt, and Micah Awe – but the Jets have yet to do much along the defensive line. Rucker, who spent time on the interior and at defensive end last year, could serve as a versatile backup in the Jets’ 3-4 scheme.

In other Jets news, longtime center Nick Mangold announced his retirement on Tuesday.