Since rejecting the Ravens’ offer back in April, Dez Bryant hasn’t been able to generate a whole lot of reported interest from NFL teams. However, Cowboys’ Vice President Stephen  Jones said plenty of teams have checked in on the team’s former star receiver. 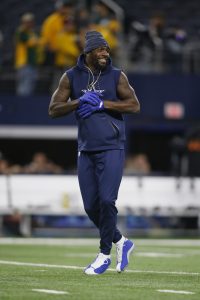 “You know at the (NFL owners) meetings I have had different conversations about him,” Jones told Clarence E. Hill Jr. of the Dallas Star-Telegram. “At the competition committee meeting, some of the coaches there speak to it. I’m sure other coaches have called our coaches and wanted input on him. The greatest thing about Dez is he is a fierce competitor. I think he is now more driven and more competitive than he has ever been. We wish him nothing but the best.”

After having spent eight years in Dallas, the Cowboys let go of the 29-year-old is mid-April. Bryant did get an offer from the Ravens, but the three-time Pro Bowler rejected the multiyear deal. Reports indicated that the receiver was seeking a lucrative one-year contract that would boost his value for next year’s free agency.

Despite his demands, Jones expressed surprise that Bryant still hasn’t caught on with a team.

Of course, teams may be underwhelmed by Bryant’s 2017 season and are ignoring him entirely. The wideout played in 16 games for the first time since 2014, but he finished with only 69 receptions for 838 yards, and six touchdowns.

26 comments on “Teams Have Asked Cowboys About Dez Bryant”