Scot McCloughan No Longer With Browns

This offseason, new Browns GM John Dorsey brought Scot McCloughan on board as a consultant. But, after a front office shakeup, the former Redskins GM is no longer exclusive to the team, Mary Kay Cabot of Cleveland.com writes. 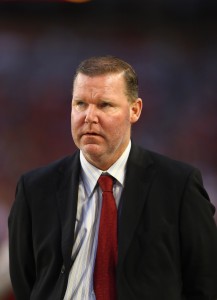 McCloughan, who helped steer the Browns towards selecting quarterback Baker Mayfield with the No. 1 overall pick, has returned to consulting for multiple teams through his private company. Despite a messy divorce with the Redskins, it would not be surprising to see McCloughan back in the GM conversation for another team down the line.

While several long-time Browns scouts have been pushed out, Browns Vice President of Player Personnel Andrew Berry remains safe thanks to his relationship with team owners, Cabot hears. However, something will have to give as the Browns have three player personnel VPs in Berry, Alonzo Highsmith, and Ken Kovash.

The new-look Browns still have work to do as they sort out their front office, including talks on a new deal with running back Duke Johnson.

3 comments on “Scot McCloughan No Longer With Browns”