The Bengals have made progress on a contract extension for Carlos Dunlap, as the veteran defensive end told Geoff Hobson of Bengals.com. 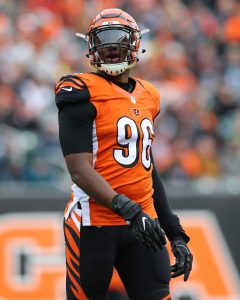 Dunlap staged something of a short-lived holdout by failing to attend organized team activities earlier this year, but Cincinnati head coach Marvin Lewis said Dunlap’s absence was “not a big deal.” Dunlap has since reported, and claims his missed practice sessions were not contract-related. Instead, Dunlap said he simply preferred to work out in Florida, although he did sacrifice a $300K bonus by doing so.

“All the comments and everything talking about the reasons for me not being here obviously hit home a little bit because they painted me to be a selfish guy, which was not my objective,” Dunlap said, according to Jim Owczarski of the Cincinnati Enquirer. “My goal was to make sure I was in the best shape for when football starts so that I can be there for my team for the long haul.”

The Bengals have two high-profile defensive linemen entering contract seasons, as both Dunlap and defensive tackle Geno Atkins‘ deals expire after the 2018 campaign. While Cincinnati may view Atkins as a priority, Dunlap also needs a new pact, as the six-year, $40MM extension he signed in 2013 is now coming to a close. Dunlap, 29, will earn a base salary of $7MM for the upcoming season.

Dunlap is still an excellent player, as he’s averaged 10 sacks over the past three years and graded as the NFL’s No. 23 edge defender in 2017, per Pro Football Focus. But the Bengals have invested heavily in defensive ends in recent drafts, picking up Carl Lawson, Jordan Willis, and — most recently — Sam Hubbard.