Steve Sarkisian is entering his second season as Falcons offensive coordinator, but the coach’s job could already be in jeopardy. Appearing on “The Wake Up Call” on ESPN Charlotte, D. Orlando Ledbetter of the Atlanta Journal-Constitution said Sarkisian is on the hot seat (via Matthew Chambers of SBNation’s The Falconholic). 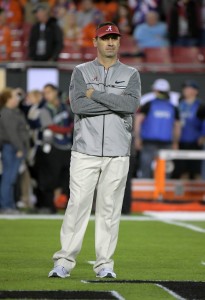 Specifically, Ledbetter noted that the offensive coordinator disappointed during his first year on the job, and a “change will be in order” if the offense struggles again. Furthermore, the team brought in new quarterbacks coach Greg Knapp in an attempt to help with the offensive game plan, with Ledbetter referring to the coach as Sarkisian’s “sounding board.”

Following a 2016 conference-winning season where the Falcons led the NFL in points and finished second in yards, the team took a step back in 2017. Atlanta ultimately ranked 15th in points and eighth in yards, with quarterback Matt Ryan and running back Devonta Freeman putting up some of their worst numbers in several seasons. The team is hoping that some of their offseason additions will help improve the offense, including first-round wideout Calvin Ridley. The Falcons also added free agent tight end Logan Paulsen and offensive guard Brandon Fusco.

Sarkisian was hired by the Falcons last offseason after Kyle Shanahan took the 49ers head coaching gig. The 44-year-old had recently served as the offensive coordinator at Alabama and the head coach at Washington and USC. His only other NFL stint came in 2004, when he served as the Raiders quarterbacks coach.

2 comments on “Falcons OC Steve Sarkisian On The Hot Seat?”