Although the Redskins in May informed Junior Galette that he would not be re-signed, the veteran edge rusher indicated Wednesday that his run in the nation’s capital may not yet have reached its end. “Lol still a chance,” Galette replied on Twitter when asked if a new contact with Washington remained a possibility. 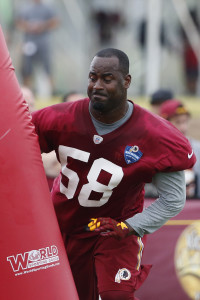 Whether or not Galette’s tweet is any indication of serious interest on the Redskins’ part is unclear, especially given that team executive Doug Williams said in March that the club was “moving in another direction.” Washington is well-stocked along the edge, as starters Ryan Kerrigan and Preston Smith are backed up by 2017 second-rounder Ryan Anderson and free agent acquisition Pernell McPhee.

If he were re-signed by the Redskins, Galette probably wouldn’t have much of a role. Other clubs that have expressed interest in Galette, however, do have a clear need at defensive end/outside linebacker: a club like the Rams, who were linked to Galette in March, still has a gaping hole at edge defender, while the Browns could use another end to play opposite Myles Garrett. Galette, who has also drawn interest from the Raiders, has reportedly also considered retirement.

Galette, of course, was once a double-digit sack force with the Saints from 2013-14, but injuries and off-field issues have turned him into more a rotational player. After suffering those aforementioned torn Achilles tendons in both 2015 and 2016, Galette finally got in a full season with the Redskins in 2017, and played extremely well on 37% of the club’s defensive snaps. While he only posted three sacks, Galette managed 25 pressures and graded as the league’s No. 30 edge defender among 106 qualifiers, per Pro Football Focus.