The 49ers are still interested in re-signing free agent safety Eric Reid, but only for a backup role and on something close to a league-minimum salary, head coach Kyle Shanahan told reporters, including Matt Barrows of The Athletic (Twitter link). However, Shanahan doesn’t believe Reid would interested in such an offer. 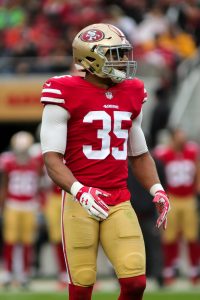 Reid has previously indicated that he’d accept a one-year deal from San Francisco, but only at his 2017 base salary of $5.676MM, so it’s highly unlikely he’d take a pact that pays less than $1MM. But it’s still unclear if and when Reid will receive a serious offer from a defensive-back needy club.

The NFL’s safety market has been stagnant this offseason, but Reid is likely also being rebuffed due to his intentions to kneel during the national anthem. Reid did take a visit with the Bengals earlier this year, but later filed a grievance after Cincinnati asked him about his anthem stance. He was scheduled to meet with the Titans earlier this month, but multiple flight cancellations prevented Reid’s visit.

Reid, 26, was something of a playmaker during his first two NFL campaigns, as he posted seven total interceptions from 2013-14. While he hasn’t kept up that rate of turnover creation, Reid is still a solid starter, and Pro Football Focus graded him as the league’s No. 30 safety a year ago.