The Jets will be without linebacker Kevin Pierre-Louis in their regular-season opener. He incurred a one-game NFL suspension, Field Yates of ESPN.com tweets. 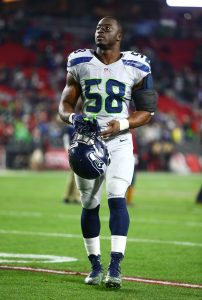 While the nature of the ban is not specified, it’s relatively safe to assume it stems from Pierre-Louis’ arrest in January. The 26-year-old inside linebacker was charged with “misdemeanor possession of marijuana, THC and drug paraphernalia, driving without a valid driver’s license and failure to display a valid license plate or current registration.” Pierre-Louis had the charge dropped in March, contingent on the completion of one year of probation.

Nevertheless, Pierre-Louis visited multiple teams as a free agent and signed with the Jets for two years and $5.25MM, so the team likely had a good idea this was coming. A former Seahawks fourth-round pick, Pierre-Louis played in 14 games with the Chiefs last season, contributing primarily on special teams.

His role on defense will likely be to supply depth behind Avery Williamson and Darron Lee, but that won’t commence until Week 2.