Could the Jaguars turn their one yearly game in London to a full-fledged move? That’s the master plan, according to a former employee of owner Shad Khan. 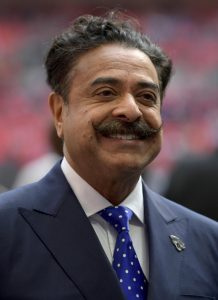 Former assistant director of football Craig Kline alleges that Khan told him to keep quiet over his plans to buy Wembley Stadium and move the Jaguars to London in 2022. (via The Telegraph). Khan is on the verge of purchasing the iconic stadium for $792.5MM, but the club denies any planned move.

“This is nothing more than the same ongoing nonsense and bogus claims made by a former employee who left the club in 2017. Nothing here merits a further response,” Khan spokesman Jim Woodcock said.

Meanwhile, a separate report from the Daily Mail suggests that Khan is exploring a scenario in which the Jaguars play their home games in London, but remain based out of Jacksonville for tax purposes. The workaround, in theory, would allow Khan and his players to avoid pricey UK taxes.

Even if that is true, it’s far from certain that the NFL, the state of Florida, and the city of Jacksonville would be on board with the proposal. Finances aside, the idea of a team playing eight games in London – or even four – would present a logistical travel nightmare for the teams playing against the Jaguars.