In an offseason where the top safeties were oddly ignored, the Texans gave Tyrann Mathieu $7MM on a one-year deal. The mid-level investment’s worked out thus far, and it might not be the last Mathieu contract with the franchise. 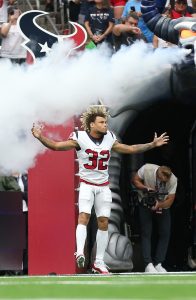 Mathieu and the Texans have not begun discussions on an extension, but it’s likely they will, per Aaron Wilson of the Houston Chronicle.

The fifth-year safety is not expected to barrel toward free agency without hearing the Texans’ best pitch to keep him off the market, Wilson notes, adding that Mathieu’s expected to give the Texans the first crack at an offer.

Mathieu is “most definitely” interested in signing to stay in Houston, he said this week. But it will surely take more than $7MM per year to make that happen.

In a strange offseason for safeties, Mathieu received the most in per-year dollars. Of the other top safeties, only Morgan Burnett (three years, $14MM) signed for more than $4MM per year. Tre Boston, Kenny Vaccaro and Eric Reid signed one-year deals. They figure to be back on the market in 2019 in hopes of cashing in, which sets up another interesting offseason at this position.

It may be a crowded marketplace, however. If Mathieu reaches free agency, he may join Earl Thomas, Lamarcus Joyner, Ha Ha Clinton-Dix and Landon Collins. Not all of these names are likely to make it to free agency, but some will. With much bigger names en route to UFA status, the safety position figures to be valued more appropriately compared to what happened this year.

Mathieu was once the NFL’s highest-paid safety, but the Cardinals cut bait on that $12.5MM-per-year extension after two seasons. But if he continues on course, the 26-year-old standout should be on track to pursue a deal in that ballpark again.

Houston is projected to possess plenty of cap space ($73MM-plus) and would be able to discuss a Mathieu deal even after applying the franchise tag to Jadeveon Clowney. Being used more as a pure safety and not a slot defender like he was in Arizona, Mathieu has 61 tackles, three sacks and two interceptions in 10 games.

One comment on “Extension Talks Between Texans, Tyrann Mathieu Likely”