Connor Barwin will not return to the Giants next season. The veteran outside linebacker still has one more year to go on his contract, but the two sides will be “parting ways,” according to Jordan Raanan of ESPN.com (on Twitter). 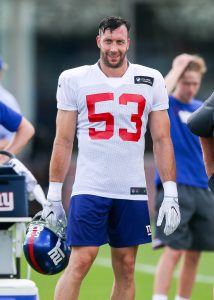 Reading between the lines, it sounds as though Barwin will be released before his $250K roster bonus hits on March 7. His two-year, $3.5MM deal calls for him to carry a $1.865MM cap number in 2019 if he stays on the roster. By releasing him, the Giants would save $1.5MM against just $365K in dead money.

The Giants appreciate Barwin’s experience and leadership, but they want to take a longer look at younger players, Raanan hears. With 56.5 career sacks, it’s likely that Barwin will draw interest elsewhere, assuming that he wants to continue playing.

Barwin’s playing time dipped as the season progressed, a sign that the Giants did not have him in their long-term plans. The 32-year-old appeared in 15 games but started in just three and had just one sack to his credit in 2018.