The Jets are negotiating to hire Gregg Williams as their defensive coordinator under new head coach Adam Gase, according to Ian Rapoport of NFL.com (Twitter link). Williams has interest from other clubs, and if the deal with New York doesn’t get done, he could take an interview with the Redskins, tweets Jason La Canfora of CBSSports.com. 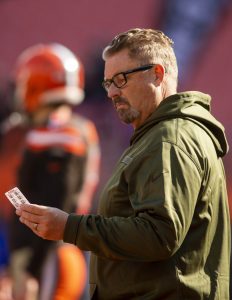 Williams, 60, took over as the Browns’ interim head coach following the firing of Hue Jackson, and subsequently lead the club to a 5-3 finish. A former head coach with the Bills and a defensive play-caller for a number of NFL clubs, Williams handled a Cleveland defense that ranked near the the bottom of the league in scoring and yardage, but still finished 12th in DVOA, meaning the team was efficient overall.

Other candidates for the Jets’ DC gig have been mentioned, but Williams appears to be the heavy favorite. Former Broncos head coach Vance Joseph was potentially in the running, but he’s the new defensive play-caller for the Cardinals. Former Colts head coach Chuck Pagano was also identified as a possible candidate.

2 comments on “Jets Working To Hire Gregg Williams As DC”