Eric Reid claims he was drug tested six or seven times after joining the Panthers last season, leading the safety to openly question whether the league was specifically targeting him. On Wednesday morning, the NFL and NFLPA released a statement saying there’s “no evidence” of any tampering in the testing schedule. 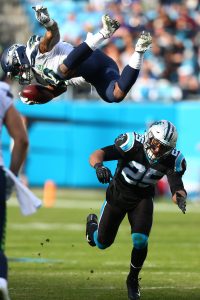 “We take any claim questioning the integrity of our collectively bargained performance enhancing drug policy seriously. We asked the independent administrator of the policy to review and produce a report on the claims of targeting,” the two parties said in the joint statement. “A copy of this report, which contains personal and confidential testing information, has been provided to Eric Reid. We will not breach any player’s confidentiality, but can confirm that the report documents the dates he was randomly selected for testing and the actual dates of the drug tests. The report also demonstrates that Mr. Reid’s tests were randomly generated via computer algorithm and that his selection for testing was normal when compared with the number of tests players were randomly selected for throughout the league during the time that he was on an active roster. There is no evidence of targeting or any other impropriety with respect to his selection for testing.”

Furthermore, the league and union inquire found that Reid’s claim of being tested six times in his first eleven weeks with the team was not accurate, a source tells Joe Person of The Athletic (on Twitter). Still, the findings of the investigation are unlikely to comfort Reid, who is at odds with the NFL. Reid still has a collusion grievance pending against the league and knelt during the national anthem in 2018.

Reid’s situation likely led to a prolonged stint in free agency last year, but the Panthers are already showing interest in keeping him off the open market this year.