It sounds like Greg Schiano is on his way back to the Patriots. Schiano is likely to join the Patriots in a top defensive role, sources tell James Palmer and Ian Rapoport of NFL.com (Twitter link). 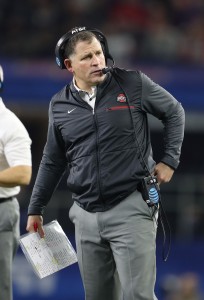 Once the deal is completed, Schiano will be stepping into the position left open by Brian Flores‘ forthcoming defection to the Dolphins. Flores was the Patriots’ de facto defensive coordinator and Schiano is expected to become the team’s new defensive chief. It remains to be seen whether Schiano will formally be given the DC title, however.

Schiano’s first made a name for himself at Rutgers, taking the program from a laughing stock to a bowl game contender. Most recently, he served as Ohio State’s defensive coordinator. Along the way, Schiano built a close relationship with Patriots head coach Bill Belichick and formed a pipeline that led RU players such as Devin McCourty, Duron Harmon, and Logan Ryan to New England.

Around this time year, it was rumored that Schiano would be leaving OSU to join the Pats’ staff, but that ultimately did not happen. With that in mind, this could be a fluid situation worth monitoring.