Beginning Tuesday, February 19, the Steelers will be able to place either the franchise tag or the transition tag on disgruntled running back Le’Veon Bell. They have until 4pm ET on March 5 to do so, which means that we may have to wait another couple of weeks for the next chapter of this story to be written. 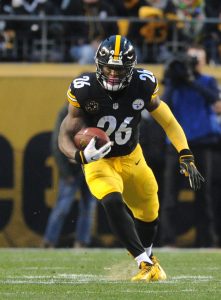 But now seems as good a time as any to explore Pittsburgh’s options with respect to Bell. Although those options have been discussed at various points throughout the last year, our readers may find it useful to have them all consolidated in one place. Let’s begin with the least likely option, the franchise tag.

The fact that Bell sat out the entirety of the 2018 season does complicate things, because it makes it unclear as to what the value of either the franchise tender or the transition tender will be. The Steelers will argue that Bell is not eligible for the increase in salary that a third tag would ordinarily include because of his season-long absence, and Bell, of course, will fight that. We have long heard that any tag would result in a hotly-contested battle between Pittsburgh and the NFLPA.

Depending on who wins that as-yet hypothetical dispute, Bell’s franchise tender would be valued at either over $20MM or $14.5MM. Either way, that is too much money for the Steelers to pay for a player that most believe will sit out the 2019 campaign if he is franchised. Pittsburgh could put the non-exclusive franchise tag on Bell in the hopes that another club would submit an offer sheet, but any offering club would need to part with two first-round draft choices if the Steelers don’t match the offer — and they wouldn’t — so that is not a realistic option either.

The only way the franchise tag makes sense is if the Steelers are confident that they would be successful in convincing an arbitrator that Bell’s 2019 tag value should be $14.5MM instead of the $20MM+ figure, and if they are confident that Bell would not want to sit out a second consecutive year, thereby missing out on another lofty salary and perhaps limiting his free agent market in 2020. As of right now, those sound like very risky propositions from the Steelers’ point of view.

This remains the most likely scenario. We have been hearing for months that the Steelers are planning on using the transition tag, and Gerry Dulac of the Pittsburgh Post-Gazette confirms that is still the case. Again, there will be a salary dispute — Pittsburgh plans to argue that the tag value should be $9.5MM under the theory that Bell’s decision to sit out 2018 resets his transition tag formula, and Bell will submit that the value should be $14.5MM — but the transition tag in theory allows the Steelers to trade Bell in exchange for draft picks.

But as Dulac points out, that is not as easy as it might seem. Even if the Steelers agree to a trade with another team, Bell would still need to sign the transition tender before the trade can be consummated, and that would require a high level of cooperation from a player who has been anything but cooperative. Bell has previously said that he would be receptive to the transition tag because it allows him to negotiate in earnest with other clubs and land a fair deal, but he would certainly not like the fact that Pittsburgh would be largely controlling the process in this scenario.

The Steelers could match an offer sheet from another team and then try to trade him, but it is unlikely that the Steelers would be able to afford to match the offer sheet, and teams with more cap space can easily structure a deal that is impossible for Pittsburgh to match. And, even if the Steelers are able to match, they cannot trade Bell to the offering team without Bell’s approval, which again calls for cooperation that Bell is not expected to give.

Of course, it could be that other teams will be scared off by Bell’s holdout and his heavy workload and will extend him offers that the Steelers could match. As Jeremy Fowler of ESPN.com pointed out earlier this month, there is still a faction of the organization that has a soft spot for Bell, and if his market does not develop as he expects, perhaps the Steelers could get him back on a club-friendly deal.

By allowing Bell to simply hit free agency without a tag, the Steelers can avoid a lot of headache and can assure themselves of getting a third-round compensatory pick in the 2020 draft. If they put the transition tag on Bell, and if Bell ends up signing an offer sheet with another club that the Steelers do not match, Pittsburgh would not be entitled to any draft compensation. The Steelers could transition Bell — they are likely to wait until closer to the March 5 deadline to do so in order to control his rights for as long as possible — and then rescind the tag if they start to feel like a trade is not possible. As long as they rescind before Bell signs an offer sheet elsewhere, they would be eligible for the compensatory pick.

Keep Him Without A Tag

It would be borderline miraculous if the Steelers and Bell simply agree to a multi-year deal to the liking of both sides without a tag having been imposed, but crazier things have happened. Not much crazier, though.

20 comments on “Examining The Steelers’ Options With Le’Veon Bell”