The first of the Browns’ two deals with the Giants will bring Olivier Vernon to Cleveland. With the veteran edge presence now set to start opposite Myles Garrett, the Browns are shopping their previous Garrett sidekick. 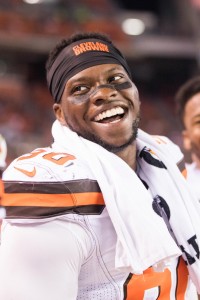 Cleveland has made Emmanuel Ogbah available for a trade, according to ESPN.com’s Adam Schefter (on Twitter).

While Ogbah has been held in high regard by both of the Cleveland regimes for which he’s played, with part of the Browns’ reasoning for taking Denzel Ward over Bradley Chubb last year due to Ogbah’s presence, Vernon will be the new starter. Ogbah is entering a contract year.

After a foot injury ended his 2017 season, Ogbah suffered an ankle malady early last year. But the former second-round pick shook that off and played 14 games — all starts. He has 12.5 career sacks and may be an option as a complementary pass rusher or depth piece elsewhere, though it will depend on what the Browns will deem an acceptable return. Ogbah could seemingly be a bench option for Cleveland, but the Browns do have Chad Thomas, Chris Smith and Anthony Zettel behind their high-profile starting tandem.

Should John Dorsey pull the trigger on an Ogbah trade, it would be yet another Sashi Brown-era piece he will have jettisoned. That has been a frequent habit of the current Browns GM’s since he took over.