The Jets reportedly wanted to re-sign ace return man Andre Roberts, but a reunion is not expected to occur, per Manish Mehta of the New York Daily News (Twitter link). 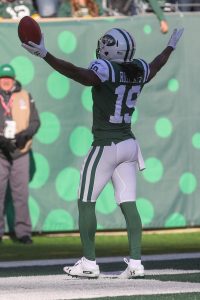 New York field the best special teams unit in the NFL a season ago, but the club is now expected to let Roberts walk after allowing kicker Jason Myers to leave for a four-year deal in Seattle. Both Roberts and Myers earned first-team All-Pro nods in 2018, while Gang Green ranked first in Football Outsiders‘ special teams DVOA.

The Jets still have plenty of cap space available, leaving their decision to not retain Roberts all the more surprising. It’s unclear exactly what sort of contract Roberts is targeting, but he’s almost certainly aiming to surpass the two-year, $10MM deal fellow returner Cordarrelle Patterson landed with the Bears earlier this week.

Roberts, 30, hasn’t been a significant offensive contributor to any team since 2014, but his return skills are unquestioned. Last season, he led the NFL in yards per return on punts and total yardage on kickoffs, scoring a touchdown in each capacity.

One comment on “Jets Unlikely To Re-Sign Andre Roberts”