We just got word that Chris Harris Jr. will be skipping the Broncos’ minicamp this week, and now we have news that another defensive star will be staying away from his team. 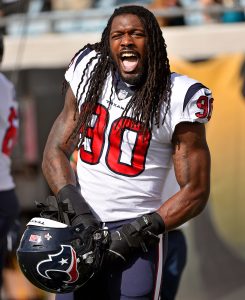 Texans pass-rusher Jadeveon Clowney will skip the team’s offseason program, sources told Aaron Wilson of The Houston Chronicle. Wilson also writes that “no deal is in sight or expected anytime soon for Clowney.” Houston franchise tagged Clowney at the beginning of last month, and we haven’t heard much since. Many observers have said the deal Demarcus Lawrence just got from the Cowboys is a good sign for Clowney, but there has been little progress between the two sides.

Clowney is supposed to make $15.44MM in 2019 under the tag, but wants a longterm deal. The former first overall pick from South Carolina had a productive year last year, racking up nine sacks in 15 games. He’s also a difference-maker in the run game, and graded out as Pro Football Focus’ tenth-best edge defender last season.

Under NFL rules, the two sides have until July 15th to negotiate an extension. If they can’t come to an agreement by then, Clowney must play the 2019 season under the tag, or sit it out like Le’Veon Bell did. Clowney, who struggled with injury issues earlier in his career, has been able to stay healthy the past few seasons. He’s seeking top-of-the market money, and it’ll be interesting to see how the Texans decide to play this. Fellow pass-rusher Frank Clark is still waiting for a new deal from the Seahawks, and whichever one signs first could have a ripple effect on the other.